Denier expresses weight in grams of 9000 meter length of the material. Denier is a unit of measurement that is used to determine the fiber thickness of individual threads or filaments. The term denier comes from the French denier. Originally, the concept was applied mainly to natural fibers, such as silk. Over time, the unit of thickness for synthetic fibers such as polyester, rayon and nylon also came to be identified with the same term.

The term micro denier is used to describe filaments that weight is less than one gram per 9000 meters. In order to be considered a “microfiber” the fiber must be less than 1 denier, which is extremely fine. This gives the fill its airy weight, downy feel, and soft, silky texture.

Handcrafted Patola silk saree from Patan in Gujarat is a heritage double Ikat fabric.Patola silk is considered to be among the best hand-woven silk in India.Patola silks are characterized by blazing and bright colours, and geometric patterns mixed with folk motifs.

The Patola silk saree has complex, five-colour patterns resist-dyed into weft and warp threads before weaving begins. Patola sarees can be vertically-resist dyed, called single ikat. Or, they may be horizontally-resist dyed, called double ikat.The Patola silk saree looks alike from both sides, and so can be worn both ways. Even weavers can’t identify which is the front or back once the weaving is over.The entire process of creating a handcrafted Patola silk saree can take up to six months. No computers or power looms are used.Mental calculations, patience, deep concentration, undivided attention and a lot of hard work are the skill sets that make one saree.3 people take 4 to 6 months to weave one saree which is 5.5 meters long and 48 inches wide. Only 3 families in Pattan make them today, out of the original 700 families.cheapest saree starts at 1.5 lac rupees and takes 1.5 to 2 years for delivery. A good Patola costs Rs. 3 lacs.

Mineral wool fibre insulation is produced by steam blasting and cooling molten glass or a similar substance and is used as an insulator and a filtering material.

Mineral wool insulation is unique and highly versatile product. Its exceptional thermal properties contribute hugely to world’s efforts to save energy and combat climate change. Mineral wool is a high-quality insulation product for many reasons. From its responsible use of locally-sourced renewable natural resources, to its environmentally sound production process through to its diverse range of applications, mineral wool insulation is a reliable and cost-effective product.

Vietnam’s local garment industry, which until now did not have much of a role to play, has revamped its production process to join the global supply chain, experts said. 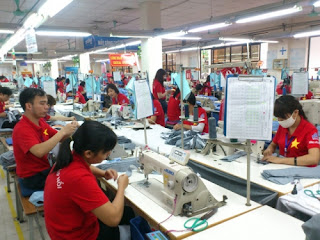 Vu Duc Giang, chairman of the Viet Nam Textile and Apparel Association (Vitas), said the local garment industry had been one of the leading industries in export value but the industry had just joined the processing stages of cutting and sewing in the global supply chain.

The industry depends on imported material from abroad, especially from China, which accounts for 50 per cent of the material for the industry’s production, according to Giang.However, if the markets providing material for VietNam’s garment industry show any abnormal fluctuations it impacts the local industry adversely.           In addition, the local textile and garment sector has not seen much co-operation between manufacturers to create a production chain and a sustainable development strategy in the long term.               Tran Thu Hien, director of Nha Be Garment Corporation’s branch in Ha Noi, said Viet Nam’s garment enterprises had focussed on developing their strengths.

They had not paid attention to demand or the lack of raw materials and had not sought ways to ensure the supply of raw materials, and had instead depended on imports, she said.

The Nha Be Garment imports 70 per cent of its material for production while it sources 30 per cent of the material from the local market.     Truong Thi Thanh Ha, general director of Dong Xuan Knitting Ltd Company, said Viet Nam required 400,000 tonnes of cotton each year, but the local market supplied 3,000 tonnes, and the remaining had to be imported from other countries.”Most of the machines, chemicals and textile dyes that Viet Nam’s garment industry uses needs to be imported. That means the supply chain remains the weak point in Viet Nam’s garment sector,” Hasaid.
Phan Chi Dung, head of the Light Industry Department under the Ministry of Industry and Trade, said the development of the world garment industry would result in the development of supply chain and e-commerce transactions.These were challenges for the local garment sector so it must reform itself in future, he said. However, 21 per cent of small- and medium-sized enterprises (SMEs) in Viet Nam had joined the global supply chain, which is lower than Thailand and Malaysia, where 30 per cent and 46 per cent, respectively, of SMEs are part of the chain.”Vietnamese enterprises have joined the lowest stages of the supply chain of processing and supply of alternative parts, not major production stages such as production of materials and design,” he said.
Giang said that to increase added value of the garment industry, its enterprises must focus on developing production of material and changing production methods.
These solutions would improve the quality of exported textile and garment products and encourage co-operation among garment enterprises to create a domestic supply chain, he said.Le Tien Truong, general director of the Viet Nam National Textile and Garment Group (Vinatex), said the local textile and garment firms should change its strategies in production and management and develop skilled workers to create favourable conditions for firms shifting the production modality from Cut-Make-and-Trim (CMT) to free-on-board (FOB) practice and Original Design Manufacturer (ODM), reported vietnamplus.
Vinatex has planned investments in a series of plants in central Ha Tinh province to form a competent production chain serving domestic and foreign markets.
At a total capital of nearly VND1 trillion (US$45.14 million), four factories, wastewater treatment, and water supply centres will be built in the local Nam Hong industrial park, covering 19 hectares.
The construction of two sewing plants, Hong Linh 1 and 2, costing VND190 billion ($8.6 million), will start in February 2016 and early 2017.
In late 2017, the Hong Linh plant for scarf weaving, with designed capacity of 1,500 tonnes per year, will be built under a VND314-billion ($14.17 million) investment.
The last of the four is a factory for dyeing and knitting worth VND410 billion ($18.5 million), which is capable of turning out 1,400 tonnes of products annually.
Vinatex has launched a drive to increase productivity which is vital when the country accelerates international integration.

ITMACH Bhiwandi opened with a renewed vigour and optimism today. True to its reputation, the 3-day fair set the stage for investment and newer opportunities right on the first day, the organisers said in a media statement.

ITMACH India in association with Textile Excellence – one of the reputed business media for Textile and Clothing industry is organizing ITMACH Bhiwandi 2015. The event has already proved its reach and reputation across the textile manufacturing hub in India following the runway success of the premiere edition of ITMACH Bhiwandi and ITMACH India in Ahmedabad. With its motto ‘To bring textile machinery manufacturers closer to their customers’, ITMACH Bhiwandi in its 2nd edition aims at bringing visitors and exhibitors from all sectors of the industry within India and neighboring countries. ITMACH Bhiwandi 2015 will create conducive business environment, generate business ideas and create investment opportunities in Indian markets.
OBJECTIVES OF ITMACH BHIWANDI :
Earlier, inaugurating the expo, Bhiwandi Mayor Tushar Chowdhury said, “ITMACH Bhiwandi is pioneering developments within the textile sector. The machines on display demonstrate a worldview. The industry here definitely takes an effort to go and fetch improved machinery from the world over, but bringing them back home and that too solely for a cluster is definitely a commendable work.”
“ITMACH Bhiwandi understands the importance of firsthand experience and our effort has always been to get the international developments of the textile industry closer to home. Promoting the development of textile clusters in Western India has always been our priority and ITMACH is just a stepping stone of our efforts. Uplifting the textile clusters and bringing them face to face with the bigger developments of the industry, proved beneficial the last year. This year is a renewed effort for the same,” remarked an enthusiastic Arvind Semlani, director, ITMACH India.
Visitors from Malegaon, Surat, Ichalkaranji, Kolhapur, Belgaum, Tarapur, and Bhiwandi dropped in to meet the technology providers on day one. “The show is set on a smooth step by step progress. And it is certainly an interesting feeling to come and interact with the industry and have such quality business discussions here at Bhiwandi,” said Manchhalal K Jain, director, Shree Daksh Jyot Silk Mills, Bhiwandi. (RKS)